How to identify fake websites?

On May 29, 2021, a user reported to imToken that over 500,000 USDT worth of assets in his wallet had been stolen. He searched “imToken” on Baidu and clicked a link to a fake website, which led to the download of a fake wallet APP and the loss.

After investigation, imToken discovered that scammers had purchased search terms and Ad space on Baidu. Whether searching for imToken, Mathwallet, TokenPocket, or MetaMask, the results showed that the first to third ranked sites were all scam sites where fake wallet APPs would be downloaded. 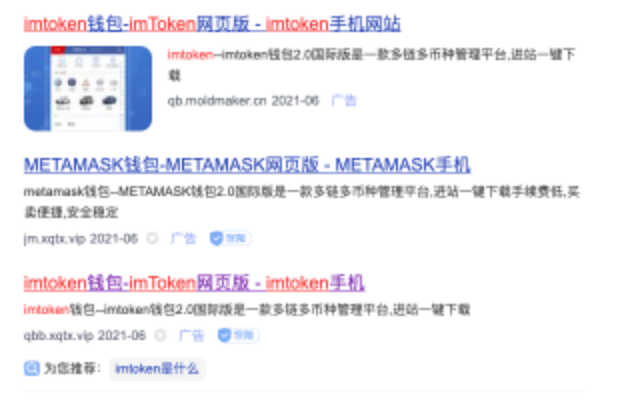 imToken has contacted Baidu to take down the scammer ads, while continuously collecting evidence to help the police block these fake websites and arrest the scammers.

Though the scammer ads have been taken down as of this writing, some of the fake websites are still there.

Here are some tips to protect you from scams:

Scams: What are they & How to avoid them

The scammer induces a user, who has 1,000 USDT, to scan a QR code to transfer 1 USDT. After a while, the user finds out that the remaining 999 USDT have been transferred to the scammer’s address without his signature.

Scammers currently thrive on Tron, airdropping tokens such as OZBT, AAMT, FIL, etc. to users. The information contained in the token airdrop informs the user that they can exchange these tokens for TRX on the official website.

When you swap tokens in the scammer's exchange, you are actually tricked into transferring TRX, USDT, etc. to the scammers’ address.

Why do we write this security newsletter?

From January to June 2021, imToken received 430 reports of scams, a 35% increase compared to the first half of 2020. In May this year, 6 tokens and 4 addresses were marked as risky by our security team. Meanwhile, imToken blocked 54 risky DApp websites and released imToken 2.9.2 with updated DApp browser security risk control. You can refer to this blog for more details.

By exposing these scams, imToken wants to prevent users from being scammed. We also hope you can share this newsletter with your friends to build “herd immunity”.

If you spot any attempted or successful website scams, please report to us by sending an email to support@token.im.