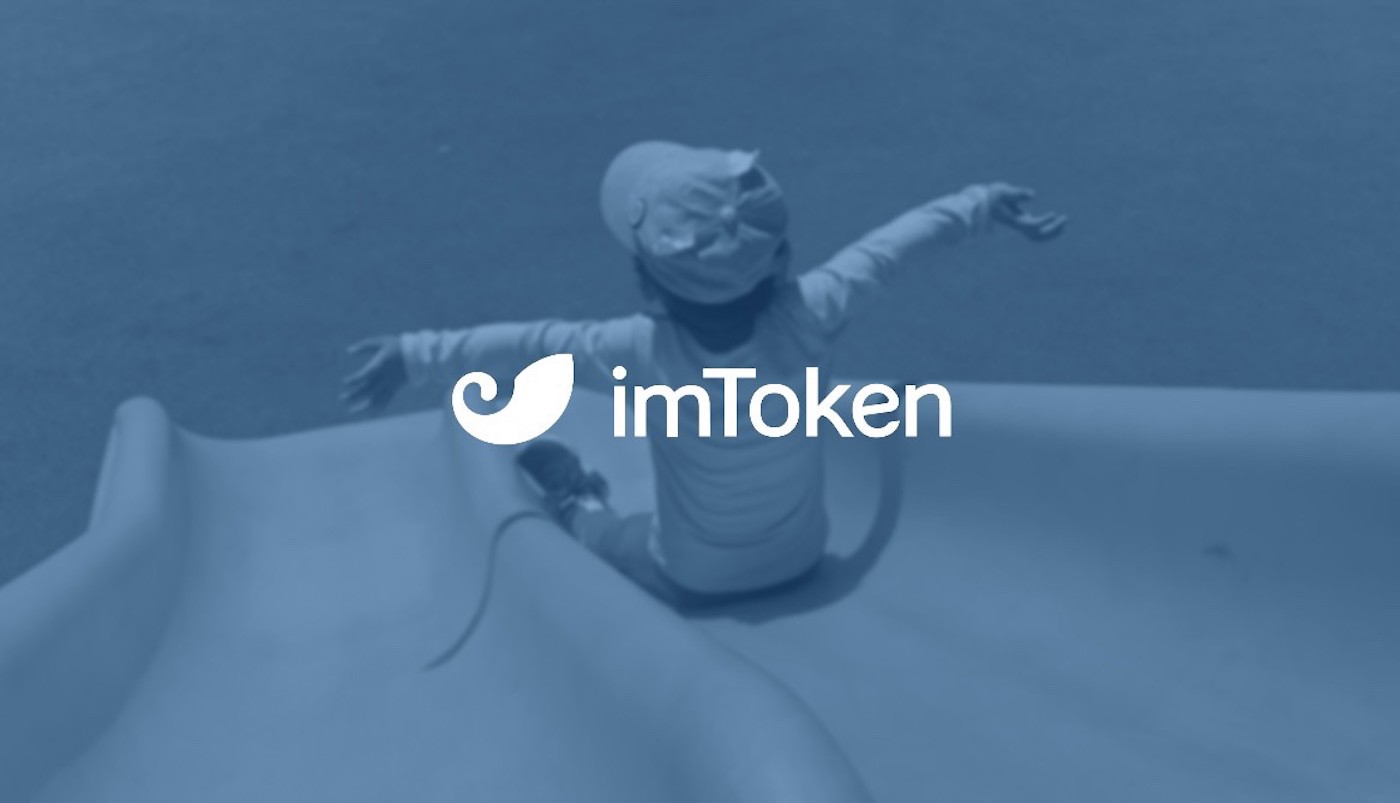 How should we prepare for embracing Web3?

After hearing so much about the term, you may wonder what is Web3 all about? The future that we are involved in from Web2 — the common internet concept that we know today, with the downside of handing over the personal data to the corporate giants and lacking capital rewards for independent creators. Web3 is the future of the internet that is decentralized, with the collective ownership of the internet.

It is common belief that Web3 is a leap forward to open, trustless and permissionless networks. Under Web3, the consensus about information transparency and sharing governance rights and ownership of the internet played the key value, rather than benefiting big entities like Web2.

According to the article of web2 &web3 from Ethereum.org, the differences of Web2 and Web 3 are： 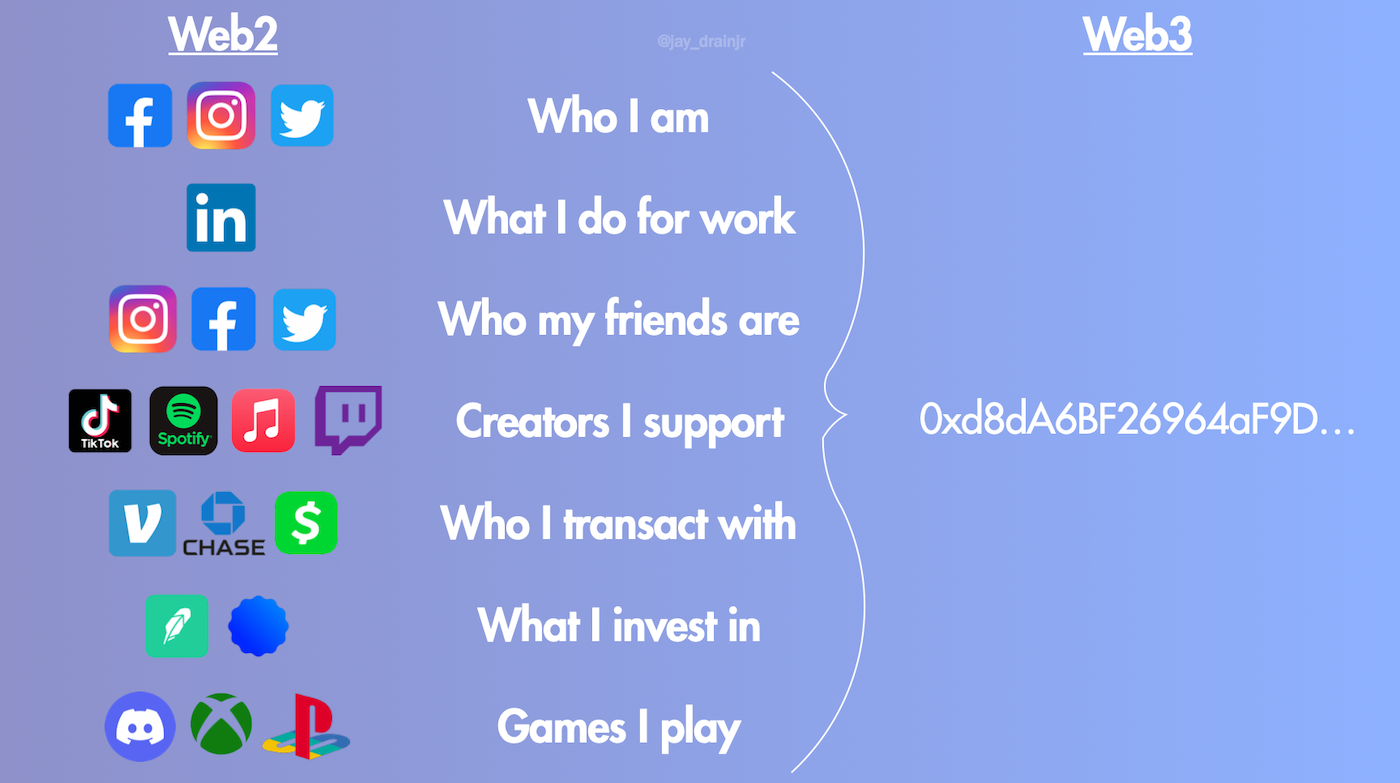 Jay Drain Jr. also indicated about the potentially important role that crypto wallet could carry in the forthcoming web3 wave: “We’ve barely scratched the surface of what wallets can achieve but with the right composition of UX, infrastructure, and community, there’s endless potential for the crypto wallet to empower consumers to manage their digital identity in ways that were never possible with Web2 products. ”

Here is a Web 3 starter pack with detailed information about web 3: https://docs.google.com/document/d/1SWJw_NTyUvgdB_asRzsnVyKjciW8dZbeqQeUeWsEiQc/edit#

How did token distribution change in Web 3?

The trend of project fundraising have been shifted dramatically during the year of 2021,

according to the research of Lauren Stephanie and Cooper Turley, the dynamic have been influenced all participants during the involvement of web3 bull run at 2021, especially:

- The investor allocations are decreasing.

- Airdrops have become a cornerstone of most distributions.

- Public Sales have all but disappeared. DAOs have shifted the majority of ownership to the Community Treasury and Ecosystem Incentives. 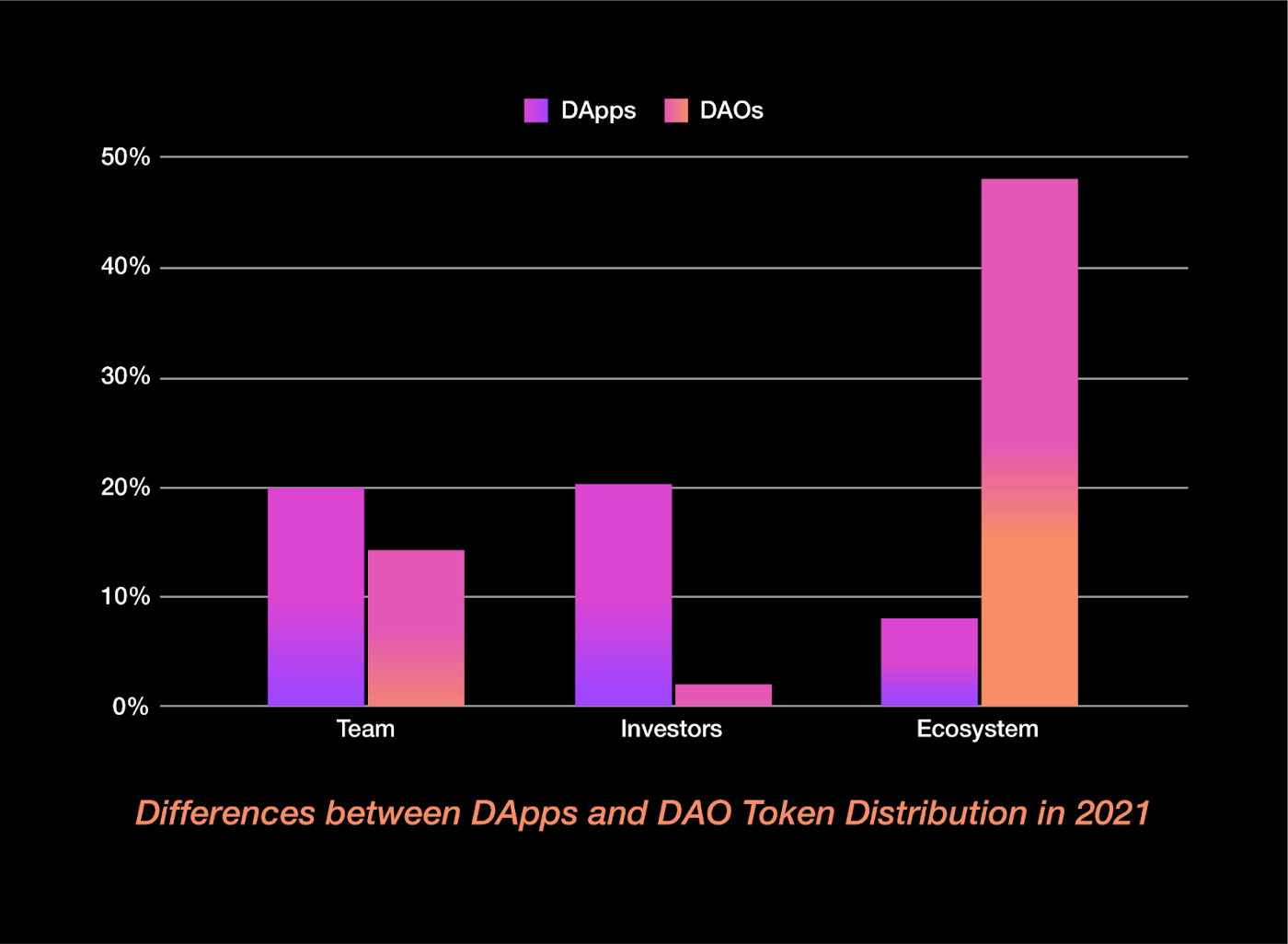 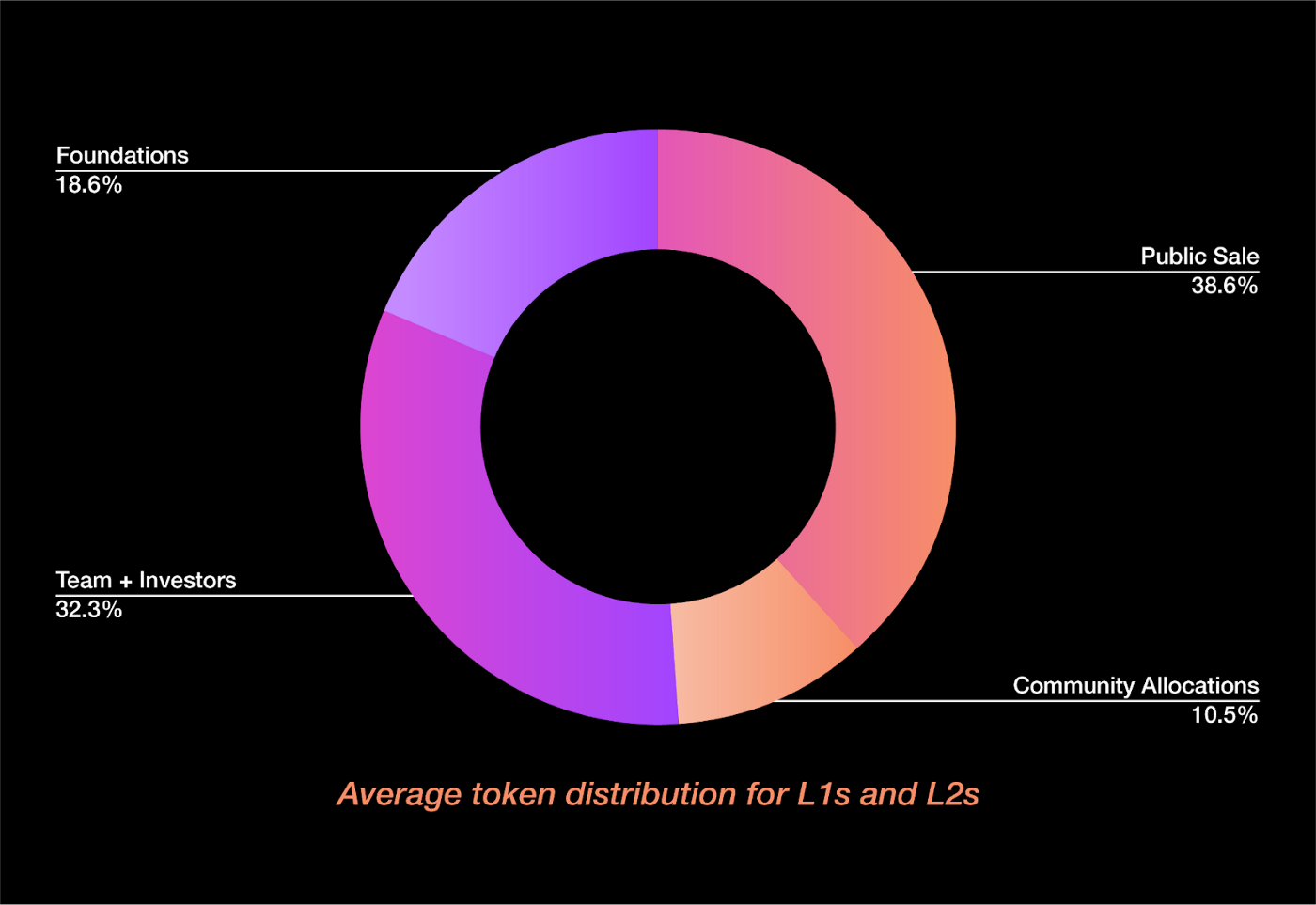 How do people socialize in Web 3？

With the emergence of social needs in terms of building communities and expanding the connection with common interests, many new products relevant to Web3 social schemes leverage Web3 native value. They leverage data ownership to empower users while leveraging familiar web2 social models to create a recognizable user experience.

As the crypto natives are living in an open sharing data environment by nature, wallet users are aggregating their digital identity into the wallets they own. Wallets carry many roles for the Web3 movement such as holding social club memberships, NFTs that reflect their personality, and cultural moments they’ve participated in. The collection of POAPs reflects the owners’ social preference and the engagement level in the Web3 movement, thus the NFT itself means much more than just proof of attendance. 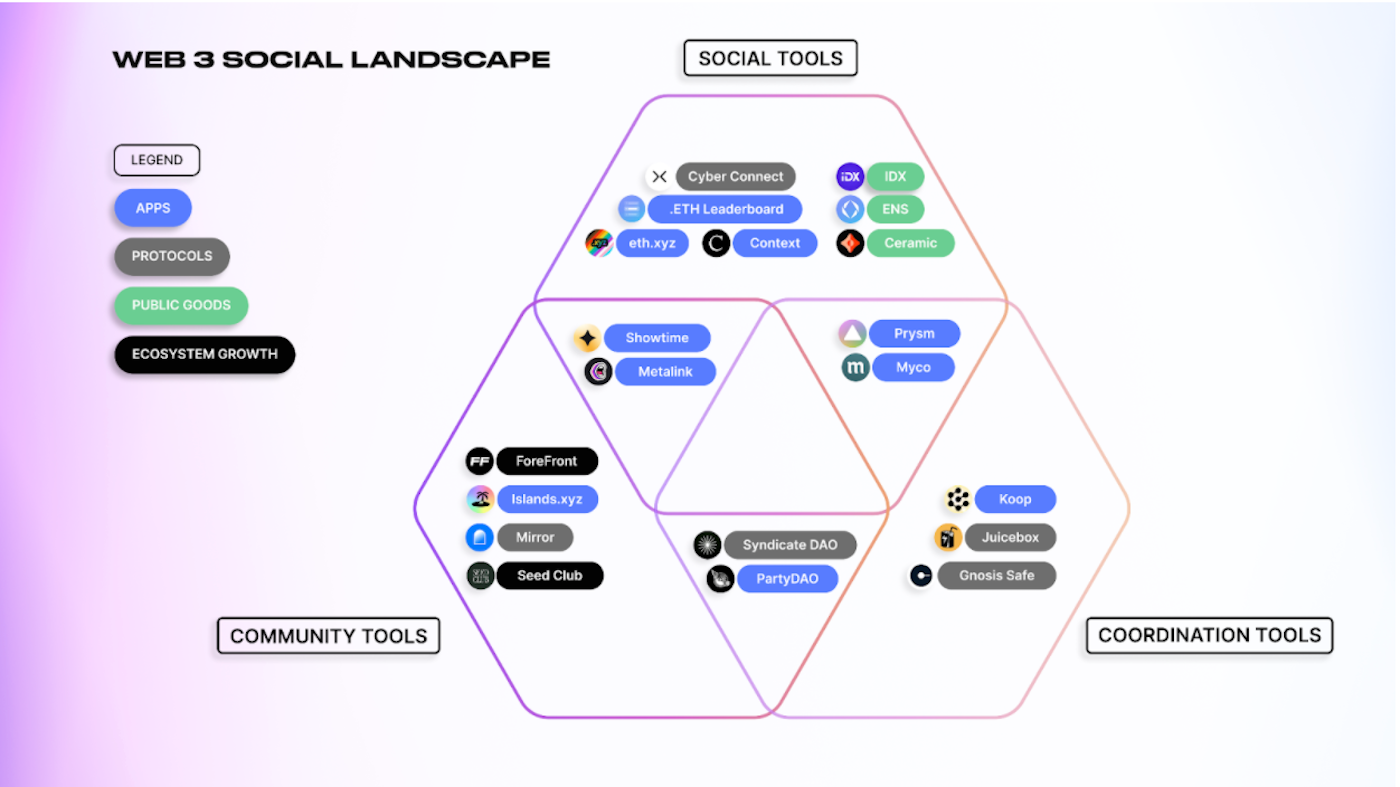 The introduction of DAO in web3 is not a coincidence, as it perfectly matched the core value of the user-centric and platform-centric nature of Web3, based on its functionality and user preference.

We have categorized DAO into 3 kinds:

Social/community-oriented DAOs: Users form communities over shared sets of values and interests. Social DAOs give the community the ability to coordinate towards a mission, program roles, and incentivize contributors. One use case could be a creator fan club that co-creates content and grows brand value together, such as Pleasr Dao, FWB, Showtime, etc.

Investment-oriented DAOs: Users truly own their assets in web3. DAOs allow groups of friends/strangers to own anything. Through investment and hence shared ownership, users play an active role in the growth of the products & communities they have a stake in. Communities coordinate group action, and communities emerge from group action. Examples are Flamingo Dao, MetaCartel, Juicebox, etc.

Decentralized grant programs: Defi protocols like Uniswap, Compound, and AAVE have their own grant system which allows contributors to find incentives through their works and rights to make governance voting on the allocation of the grant.

However, we have seen that there are some limitations of Web3 right now, as web2 &web3 stated:

Scalability: transactions are slower on web3 because they’re decentralized. Changes to state, like a payment, need to be processed by a miner and propagated throughout the network.

UX: interacting with web3 applications can require extra steps, software, and education. This can be a hurdle to adoption.

Accessibility: the lack of integration in modern web browsers makes web3 less accessible to most users.

Cost: most successful dapps put very small portions of their code on the blockchain as it’s expensive.

Legal: the regulation and privacy policies are not reformed and are needed in the very near future.

Education: for entry-level web3 interest groups, learning how to use all apps and wallets could be the main hurdle.

Come for the creator, stay for the economy